I’ve been thinking a lot recently about expectations: the pressure we put on ourselves to run ‘for a time’ and what this means to us, and how this affects us whether we do or don’t achieve that time.  Also how our expectations of ourselves change over time. Whether that’s being really affected by not getting the PBs of our 20s when we’re in our 40s or 50s, or conversely, if it’s someone who’s still on the upward curve, how we’re no longer happy with times that would have made us ecstatic when we started running. We put a lot of pressure on ourselves. And yeah, sometimes that’s a good thing; some people need to be utterly focused and driven to achieve what they want. Amongst the group that I helped to train for the recent Oxford Half marathon there were quite a few who really wanted to get under 2 hours. Now for some people, they could rock up on very little training and knock out a sub 2 hour half marathon (bastards) but for us mortals that requires a very focused and dedicated training. One of our group, who is super driven and AMAZING, knocked a whopping 16 minutes of her PB and ran it in 1:50.  But she didn’t just do that from nowhere – she trained HARD for that well- deserved PB. 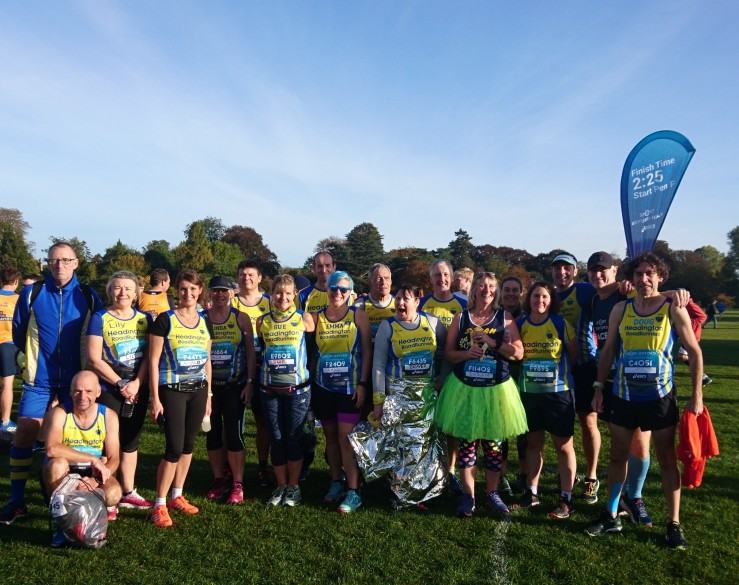 A fraction of the HRR posse before Oxford Half.

Other members of that training group came in at 1:58 or 1:59 and were absolutely deservedly overjoyed at their success, and a couple of others came in at 2:01 or even 2:00:30 and were devastated. And I wish with my whole heart that I could make them realise how amazing and inspiring and damn well out of the ordinary they ALL are. They worked SO hard, and did SO well. That margin is tiny, and yet takes on such huge significance. I get it, I REALLY do. I know that feeling of disappointment so well, and of just wishing we hadn’t slowed down for that one water stop or needed a wee or whatever. But it’s not a failure.  My coaching buddy often talks about how we live in a runners’ bubble, and it’s indisputably true – we surround ourselves with other runners who do these amazing things so that we start to think that it’s normal to be able to run not just one marathon (which, to use the oft quoted statistic, only 1% of people ever do!), but run one marathon and then go out and run another one a couple of weeks later. Or even that running a marathon or a half marathon is something that anyone can achieve and we “should” (that word is such a bastard) be able to run a half in under 2 hours. That we’ve failed if we don’t. Most people (you know, muggles) think running 13.1 miles AT ALL is pretty amazing – and it IS! Let alone running it that fast, and having the sheer grit to keep going when you feel dizzy and your legs are fighting your brain telling you to stop. Because running that far at 9 minute miles, for most of us, HURTS.

The way our expectations can affect our enjoyment became starkly apparent to me with the contrast between two half marathons that I ran recently. The first one was Swindon Half and the second was Oxford Half this weekend. Swindon is a well-organised race that I had really enjoyed and got my PB at the year before, which still stands at 2:07.  I had set myself up to get a PB again this year; this was going to be it. I had even considered going for that elusive sub 2 myself, but then decided that I’d sign up for Abingdon Marathon again, so that became my focus and to be honest I didn’t want to do the training it would entail. I have no idea if I could do it, but I know that to even try I’d have to work my arse off and do some really dedicated hardcore training.

But despite the fact that I’m marathon training, I had put the idea into my own head (no one else is responsible for this, this is all entirely down to my attitude towards the two races!) that I would get a PB at Swindon. I had remembered that there is one EPIC hill at mile 11-12, but then mile 12-13.1 is wonderfully thrillingly downhill. I had remembered the rest of it as being flat. Yeah. It’s not. But the point I’m ramblingly trying to make is that I’d decided I wanted a PB at THIS race, and I had mentally set myself up for doing it under 2:05… The problem was that on the actual day I really wasn’t feeling it. Partially due to the fact that (TMI warning, not even sorry) when I got home from Swindon I literally stepped through the door and felt my period start…. And the day before my period starts is literally THE FUCKING WORST day to try to do any sort of run whatsoever. Stupid uterus. And partly because I was at that point in marathon training where you are just dog tired. ALL. THE. TIME.  But for whatever reason I had mentally set myself up. And it just didn’t happen. I took off way too fast, caught up in the atmosphere and just feeling good, and no matter how many times I hear it (and hear myself say it to other people!) it’s just too easy to get caught up in it and go too fast. And boy did I ever pay for it. Did the first maybe 4 miles too fast, absolutely knackered myself, got into my own head and listened to that little voice that said “Ah fuck it, you’re not going to PB, just have a little walk”… and yeah, once you walk, you’re pretty much doomed – you break that precedent and it becomes so hard to keep running afterwards because you’ve already walked a bit, so why not walk a bit more? Why not walk through that water station or up that fuck-off hill? So yeah, ended up doing Swindon Half in 2:10 something, and properly beat myself up about it for a while. Then I realised that actually prior to the same race last year, 2:10 was my PB! I was ecstatic when I’d got that PB before and I wasn’t even marathon training then. What a tool!

Contrast THAT experience with Oxford Half this weekend which – spoiler alert – I did in 2 hours and TWENTY-SEVEN minutes. My second slowest half marathon (the slowest being Milton Keynes, which was 28 degrees and I threw up twice from the heat – FUN TIMES!). But you know what? I LOVED EVERY MINUTE OF IT (Oxford, not throwing up at MK Half). Because my only aim for Oxford Half was to enjoy it.  It was two weeks before Abingdon Marathon, I didn’t want to do anything to screw that up, because that is my A race that I’ve been training for and so just did Oxford Half because I had a free place from volunteering last year. I ran it with one of my best friends who I could talk to forever, who sadly twisted her ankle during training (steep stairs, most delicious new puppy, who I swear is an ACTUAL mogwai) so wasn’t able to go for a time either – and we just gossiped our way around, soaking up the atmosphere, having a little jig to the amazing bands and DJs and drumming groups that were playing on the course. Waving to all our friends and family – stopping for hugs, stopping for a wee (which I’ve literally never done on a race before, but why the hell not, we had all the time in the world!).

HRR’s on the start-line, me and Clare, and stopping to hug my baby girl a quarter of a mile from the finish line!

That experience made me reassess my attitude about racing. OK, so some races I’m going to do for a time – I’m really hoping to get a PB at Abingdon, and I’m not saying it’s not OK to have that focus and that drive and to work that hard and get a PB. It’s a great feeling. But at the same time it’s also OK if you don’t want that. Or not to want that for every race. To do the odd race just to have fun and hug your mates and just really enjoy it! I think for me personally I’d lost sight of why I do this. I do it because I love it. But it’s easy to get into a mindset that if it’s not REALLY FUCKING HARD and painful then you’re not trying hard enough. What’s wrong with doing it for actual fun?! I had a really funny conversation with another friend when we were doing a long run. We decided that I was ‘allowed’ to just enjoy Oxford because I hadn’t paid for it but he said if he pays for a race he wants to HATE every second of it because then he knows he’s worked really hard!

I suppose no one’s attitude is wrong. But it can’t always be about going eyeballs-out for a time. Sometimes we need to stop and smell the roses. Or in my case stop and hug the vicar.