Yes, I KNOW this one isn’t going to have universal appeal. I could shoehorn something in for my male running friends, but I REALLY don’t know which plasters are best for stopping horrendous nip bleed. And I’m just going to recommend Vaseline for like, EVERYthing else, because I don’t want to think about specific male skin care needs – maybe you get terrible screaming crotch rot or something; I have never had those conversations and I don’t want to, despite some of the stuff I will happily share with my running buddies that really should not be discussed in polite company.  But some of this stuff might be useful to men too, who knows? I just want to share my painstaking research on which waterproof mascara is really going to stay on after 5 hours of blood sweat and tears – well, sweat and tears, mainly. And chafing. I talk about chafing a LOT, don’t I?

And I don’t really want to get into the ins and outs of whether it’s necessary, advisable, or feminist to wear make-up when running. I do. I like it. We don’t need to get judgy about it…

Eye make-up:  There’s an Eyeko sports mascara that I SO wanted to love because the packaging is just lovely. But to be honest, it wasn’t that great. I mean, to be fair, I did wear it for my worst marathon so far, and not only did I cry fairly continuously from mile 13 to mile 25, but it started off sunny and then rained REALLY hard for the last bit, so this may not be a fair assessment. BUT my eyes were NAKED by the end of the race, and that will not do. Also I feel that my other two great recommendations could have taken all that Brighton 2018 had to throw at them and still flick it the v’s.

So my joint winners depending on price range and preference for MASSIVE lashes or a bit more subtlety go to – Boots No7 Lash Impact Waterproof, for amazing lasting power and price. This has been my go-to for a few years now (bar the ill-advised dalliance with the Eyeko). It doesn’t budge nor smudge. And if you are in the mood for a new pricier splurge from MAC (look, we all have that one friend who we shouldn’t go shopping with because we end up trying things on in Mint Velvet with price tags that make us physically feel sick and start calculating how many hours work that amounts to – you know who you are…. she MADE me go into MAC and try stuff), which is pretty flipping astounding. OK, it costs £20 and I haven’t actually trialled it on longer than 7 miles, but my God it gives you proper twiggy lashes and seems like it would stay on through the actual apocalypse. Also I have high hopes for it because I use the MAC liquid eyeliner (YES I DO WEAR LIQUID EYELINER FOR RUNNING SOMETIMES AND I’M NOT EVEN SORRY) and that stuff has stayed on through not only a marathon, but also a muddy rainy cross country, a 17 miler in the actual snow and a passionate tryst with Tom Hardy in the back of a Fiesta. (That last bit may not actually be true. But I bet it would stay on through that if only Tom Hardy would let me test this theory out on him.)

Tinted Moisturiser/BB Cream: Boots number 7 again for tinted moisturiser, although Superdrug BB cream is pretty smashing and ridiculously cheap (so you can justify the MAC mascara, ahem) – light, non greasy,  bit of coverage and makes you kinda glowy. Not that you need glowy at the end of the run. I glow like a racehorse, and to be honest, I don’t know why I bother with tinted moisturiser apart from for the pre-run photo, because by the end of a long sweaty run it will be gone anyway replaced with that horrible salty white sweat crust that you get after a really good session. Lovely.

Lip Balm: I honestly thought I’d cracked this (oh God, sorry, that was a terrible pun, I never normally apologise but that was genuinely awful) when I got one of those little ‘all purpose balms’ from Holland and Barratt. It was in a little thin rectangular tin with a slidey top, which just seemed like the most perfect size and shape for sticking in your pocket/running belt, and using if your underarms started chafing (see next para) as well as for dry lips. But honestly I’m not even going to try to remember what it was called because it turned out to be shit. The tin went rusty and the balm smelled really weird and went all grainy. So sod that. My favourites for lasting power and moisturisation power are Lush Honey Trap and Carmex vanilla in a tube (I will pretty much buy anything that smells of vanilla, so I may be off on that if you don’t like it, but Carmex is fab. It stays on for ages).

Stuff for chafing: You know the score. You’ve done a really hard long run or race. Think you’ve got away with it on the chafing front, because you SWEAR you covered yourself in ALL the regular chaffey places – underarms, all around your bra straps and between your boobs in possibly the least sexy boob action you will ever experience, waistband, edges of knickers, etc. But. You get in the shower and ACTUALLY scream when the water hits that one bit you missed. Because the drawstring of your shorts must have got lodged in your actual navel and rubbed on the scar where they literally pulled your gallbladder out through your belly button for TWENTY-SIX POINT TWO MILES… (I don’t mean they pulled my gallbladder out for 26.2 miles, nobody has a gallbladder that long, I mean the knot was lodged in my belly button as I ran that far. Maybe my grammar needs work). Or… ORRRR you put your keys in your back pocket and then forgot and wore a Hydration belt on the small of your back where the bottle squished the keys into you for – I think it was 17 miles that time – and gave you a chafing scar in the shape of a tiny little penis on your back. (I can say this because none of the men I know will have read past the title. Hahaha. As the meme goes we revolt at midnight! Smash the patriarchy!)  ANYWAY – I use Bodyglide, just the regular one (this is one of those products where the fucking advertising bollocks people will try to sell you a pink LAY-DEE version for twice the price which is EXACTLY the same) . And when I manage to put it in all of the right places it works very well. Also it says ‘you got this’ on the back of the tube, so your anti chafe balm has your back and believes in you even if no one else does.

Sun Cream: This was recommended to me before my first marathon and it’s so freaking awesome I wouldn’t wear anything else… I mean, I wouldn’t wear a different sun cream. I don’t do naked marathons. Once saw a guy doing a marathon in a black mankini and a bow tie. Couldn’t even consider whether he had a hot bod, because all we could think about was the chafing. See above. SO Calypso – get it from Wilko’s. Yes, it has the texture of egg white, YES, it smells like vodka. But it will stop you from getting sunburn even if you, like me, did Milton Keynes Half (or even like some of my mates the FULL – omg, the horror) marathon in 28 degrees, or this year’s London Marathon. And after a recent skin cancer scare (turns out, you get to a certain age, things just start growing on you, but the extremely flirty consultant told me my mole was not only benign it was “rather lovely”, which was a bit odd but also very reassuring) the use of a really good sunscreen cannot be overstated. 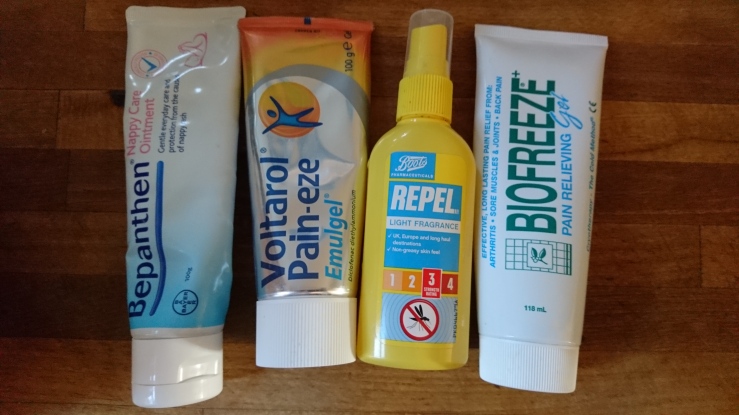 Other stuff: If, like me, you are utterly delicious to all things bitey, who like to use your neck and ankles as an all you can eat bug buffet, then I would recommend this boots insect repellent. It doesn’t stink too badly. Doesn’t contain veet or beep or whatever that horrible stuff is that is BAD for something or over. But I don’t recommend inhaling it. The freezy gel is great if you’ve got a minor niggle of some description. I used it on my old lady hip. And it doesn’t have any actual pain killers in it, so you can use it in conjunction with the iboprofen gel if you’re a real pain wimp. Like me. But obviously if you get a sharp pain then STOP. I’m a coach now, I have to be responsible and say shit like that.  I’m not sure why I put the bepanthen in that picture. I used it on my MASSIVE leg tattoo (massive tattoo, not massive leg, contrary to my daughters drawings – for some reason she always draws me with one big leg. Like seriously, I’d be running round in circles if that was anatomically accurate).

So there you go, that’s the rundown of what I use. Tried and tested, innit. Would love to hear any other recommendations in the comments!